Terissia Odkho isn’t sure of her age as she doesn’t have a birth certificate but she thinks she is 80 years old. She had ten children but nine of them died from HIV/Aids. Her one remaining daughter moved away and never visits. Her only income or means of living is what she can grow in her garden.

Terissia arrived at the clinic feeling very ill and she hadn’t eaten for a few days. Her eyes hurt, her neck, back and legs were aching and she had a fever. She had just finished planting maize in her shamba (garden) as the long rains had just started. They were a little late this year so she was rushing to plant so she would be able to eat at harvest time.

She was examined by Alex, our nurse, and was sent to our lab for a blood test. This showed she had malaria and typhoid and she was also very arthritic. She was treated for the malaria with a course of tablets, given the first injection for typhoid and some pain relief for her arthritis.

Terissia came back daily for the next three days to have injections as treatment for typhoid and felt hugely better. She was so thrilled and thankful for the food and quite excited at being asked for her story. 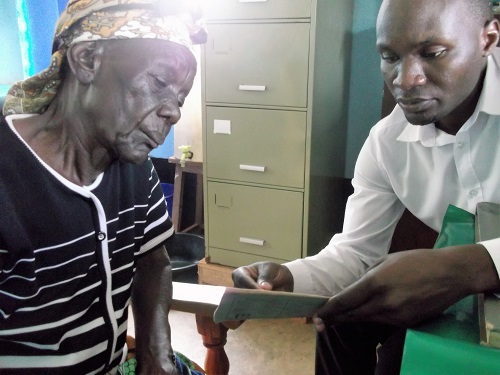